If you like this, then please share!
8 Tips For A Healthy Halloween Sourdough Stuffing Bread —With Fermented Cranberry Sauce

HMOs and Bifidobacterium — Why They’re So Important For Your Gut

One of the most important Bacteria In Your Gut 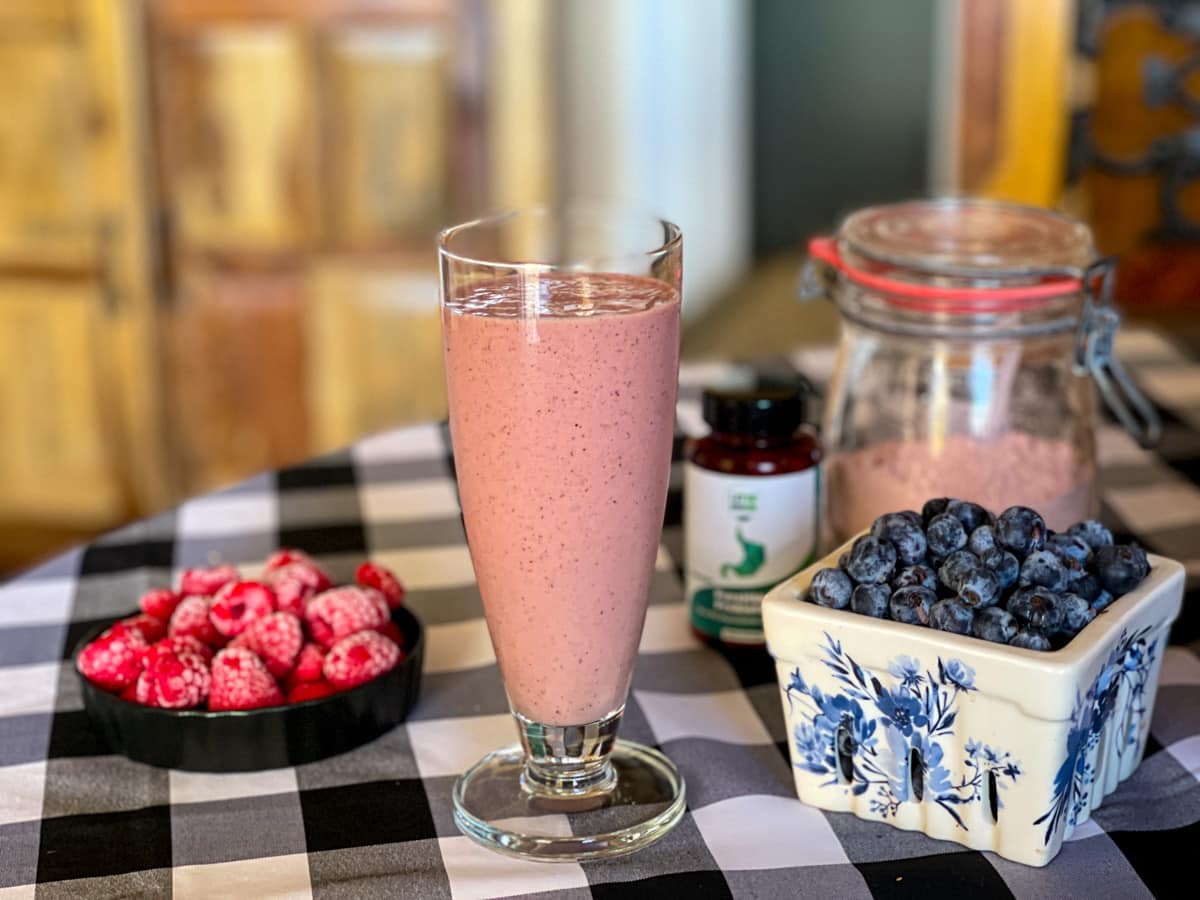 For years I've been looking for a way to increase Bifidobacterium. I've been wanting to discuss this all-important gut bacteria, but first I wanted to figure out how to significantly produce more of it since it diminishes with age. The more Bifidobacterium you have, the more energy you have, the better you age, and the better your immune system works. You'll have less inflammation throughout the body, it primes you for weight loss, and helps decrease food allergies, especially those due to dairy and gluten. It's also important for the production of vitamin B, antioxidants, conjugated linoleic acids, enhancement of colon butyrate production, and so much more. [1]

Bifidobacteria have long been regarded as one of the most beneficial members of the human gut microbiome. Lower levels of this beneficial bacteria have been shown in obese and diabetic individuals and in individuals taking antibiotics. Also, those suffering from irritable bowel syndrome or inflammatory bowel disease have shown lower levels of bifidobacteria as well. [2]

You acquire most of your bifidobacterium at birth.[3] Bifidobacteria become the predominant (95%) microorganisms in the intestine within a week after birth.[4] Mothers transmit their unique bifidobacterial strains to their children shortly after birth but mostly it comes in mother's milk. So important is this bacteria that they started adding it to many baby formulas. In infants, Bifidobacteria help establish gut barrier function and modulate immune system response. Bifidobacteria species and subspecies are some of the most important and beneficial bacteria strains in the intestine, not only for infants but also for adults. They've even found that long-lived centenarians have many specific strains of Bifidobacterium in their guts while most older people have very small amounts.[5] 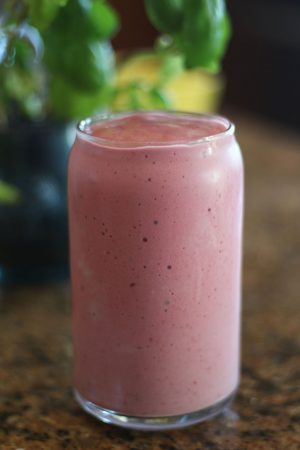 Certain foods feed bifidobacteria such as fruits (especially berries), kefir, [6] yogurts that contain bifidobacterium, and many vegetables. As you get older, your bifidobacteria diminishes. When you're young, it comprises 95% of all your gut bacteria. Bifidobacterium levels can be as low as 5% as you get older and you want lots of Bifidobacterium. It keeps you young and healthy! So you need to build it back to help you stay young, keep your weight in check, and your immune system strong - but how?

This felt so important to me that I actually developed a new yogurt with bifidobacteria that is coming out in the future, but even more important was my own journey on how to build it rapidly with a special prebiotic.

Supplementation in pill form doesn't work very well and can often end up in parts of the body where they don't belong, so it's not a good idea to supplement with bifidobacterium pills. One of the best ways to make more bifidobacteria is from Human milk oligosaccharides (HMOs) which are special carbohydrates just like the ones you had at birth and it's easy to do. And no, you're not drinking human milk but rather a prebiotic that creates more bifidobacterium.  If you have a lot of bifidobacteria, it feeds your other good bacteria too, and then you are off and running.

One day while listening to a podcast by Ben Greenfield, his guest was Joel Greene. Joel (@realjoelgreene) had written a book called The Immunity Code: The New Paradigm for Immune Centric Health and Radical Anti-Aging. In this book, he has cutting-edge research on how to build Bifidobacterium, how important it is, and so much more. It's a great book! I'm not one to jump on the latest, greatest new trend, but this was different. I tried his gut-changing protocols in his book, which were easy and fun for me, and my life transformed. My energy went through the roof and every area of my life got better. I felt so good!

Here's the deal, I already felt pretty good, but building bifidobacteria made me feel years younger, and seven months later I still feel fantastic. I couldn't believe what a difference it made. So I contacted Joel. I wanted to talk to him about what he had learned and then to share it with you.

(or watch the video!)

What you seek is seeking you ~ Rumi

When I first heard about HMOs I went looking for them. I found them in baby formula but wanted a purer form. I found Layer Origin (@layer_origin) and was impressed by their products. They actually make HMOs through precise fermentation, and bio-identical HMO delivers all the benefits without any actual human milk in the product.

The third most abundant nutrient in breast milk, human milk oligosaccharide, 2'-Fucosyllactose (2'-FL) has been clinically proven to improve the infant and adult microbiome by boosting the immune system and cognitive functions. [7]

When you consume HMOs, they promote the growth of powerful probiotics in the gut like Bifidobacterium and Akkermansia Muciniphila, which help heal, seal, and protect the gut lining.

HMOs help improve the immune system by stimulating innate immune system responses, inhibiting pathogens like E.Coli, and reducing inflammation. Bifidobacterium longum subspecies infantis also boosts the production of proteins that close gaps between gut cells to keep microbes out of the bloodstream and increase anti-inflammatory molecules that boost the immune system. To achieve those beneficial results, B. infantis has to feed on HMOs.[3]

A few days after my podcast with Joel Greene, Layer Origin (@layer_origin) contacted me and told me of their HMO product never realizing that it was their product that I took.  Fast forward, I did a podcast (check out the podcast below) with them and then got their product to sell so you could have easy access. I'm so excited about what this means for you. I've been searching and finally found a way to build this all-important bacteria! Let me tell you how I did this.

How to take HMOs 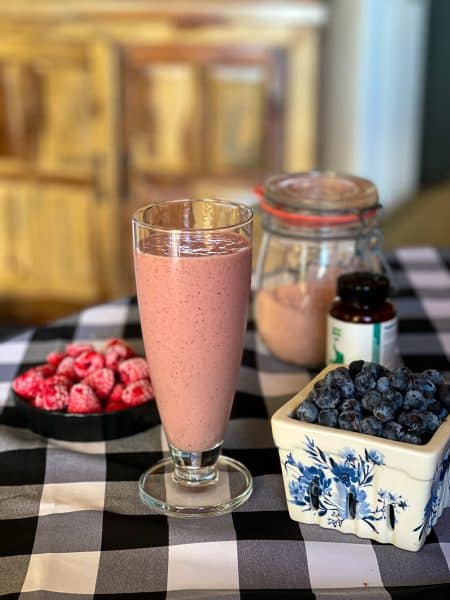 You should always start out slowly building HMOs. You're building a lot of good bacteria in your gut and they work in numbers so they'll want to do their job going after pathogens and basically cleaning house. Go slowly and take breaks if you need to. Read my article on the Healing Crisis for more help.

I took one HMO capsule (650 mg) every day. I opened the capsule and placed it in my kefir smoothie with frozen or fresh berries for about 12 days. You can take just the capsules too, but I know that kefir feeds HMOs so that is how I started consuming it.

I followed Joel Greene's protocol in his book, Immunity Code (I highly recommend you read it).

After two weeks, I added two capsules to my smoothies every day and also made sure I consumed berries in my smoothies too, along with Red Phenol powder which also feeds Bifidobacterium powerfully. Check out this article for recommendations of berries: Why You Should Eat Berries Every Day — 50+ Recipes

I did this every day until the bottle was empty. Continuing to feed this bacteria is very important and easily done. Having a kefir smoothie every day with berries (frozen or fresh) and even Red Phenol Powder is one of the easiest ways to keep it fed and happy. It's so important to eat lots of fibrous vegetables and fruits to keep your microbes happy and thriving, and remember you can change your gut in a short amount of time just by changing what you eat. This goes both ways, good and bad. Eat a lot of garbage and your microbes will suffer and so will you. You want to have the ability to steer immune populations toward health, and feeding good bacteria does the job quite effectively. 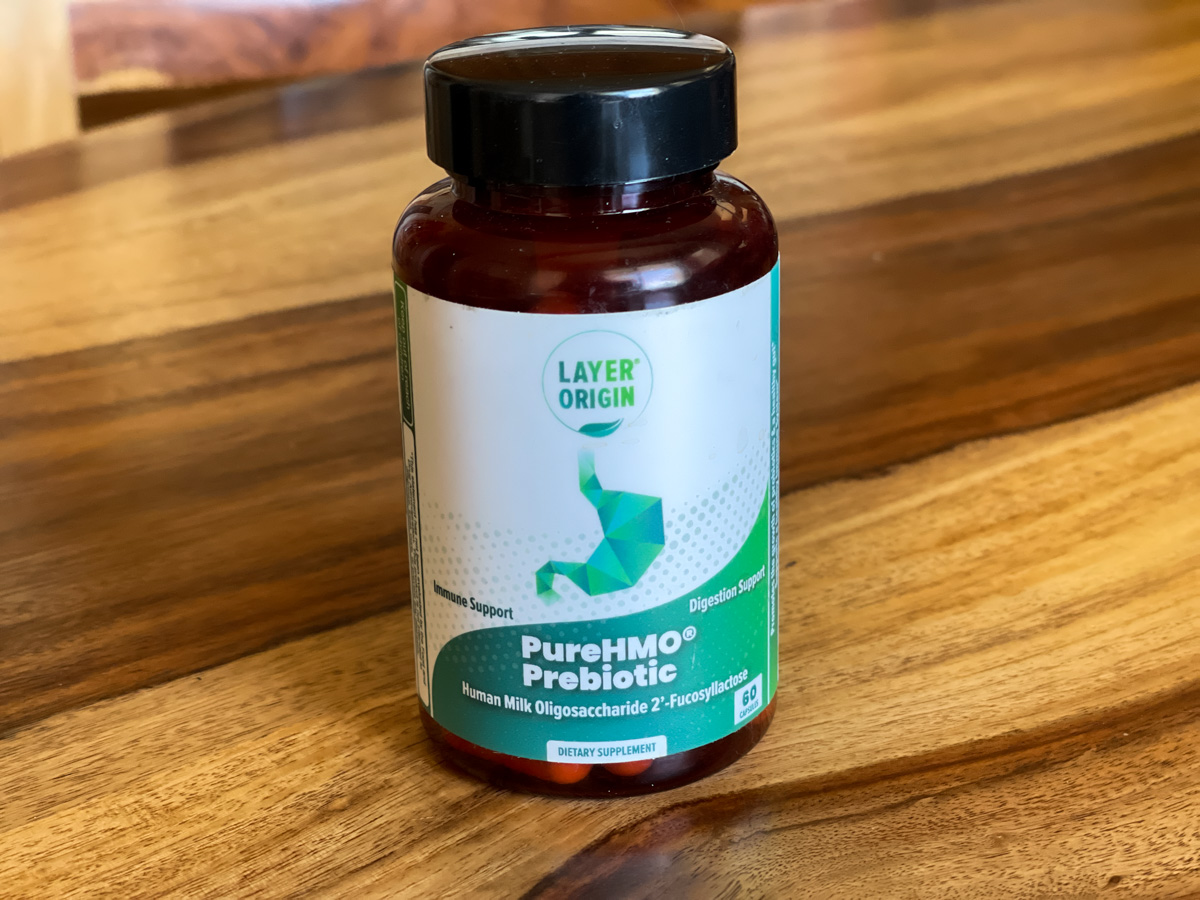 Where to find HMOs

You can find HMOs in capsules or powder and even some baby formulas have them. Here are links to get them on Amazon and Layer Origin, and I also have them available in my store:

This may sound like a big sales pitch, but actually, it did so much for me, I couldn't wait to tell you. Most of my life is about finding ways to help you find out how miraculous your body truly is. Wellness should be the norm and not the exception; and in these troubling times, we need all the help we can get. I want you to know what it means to live and not just be alive. You are comprised of 100 trillion microbes and all they really care about is you! Once you harness the power of microbes and feed them what they need you'll be soaring. 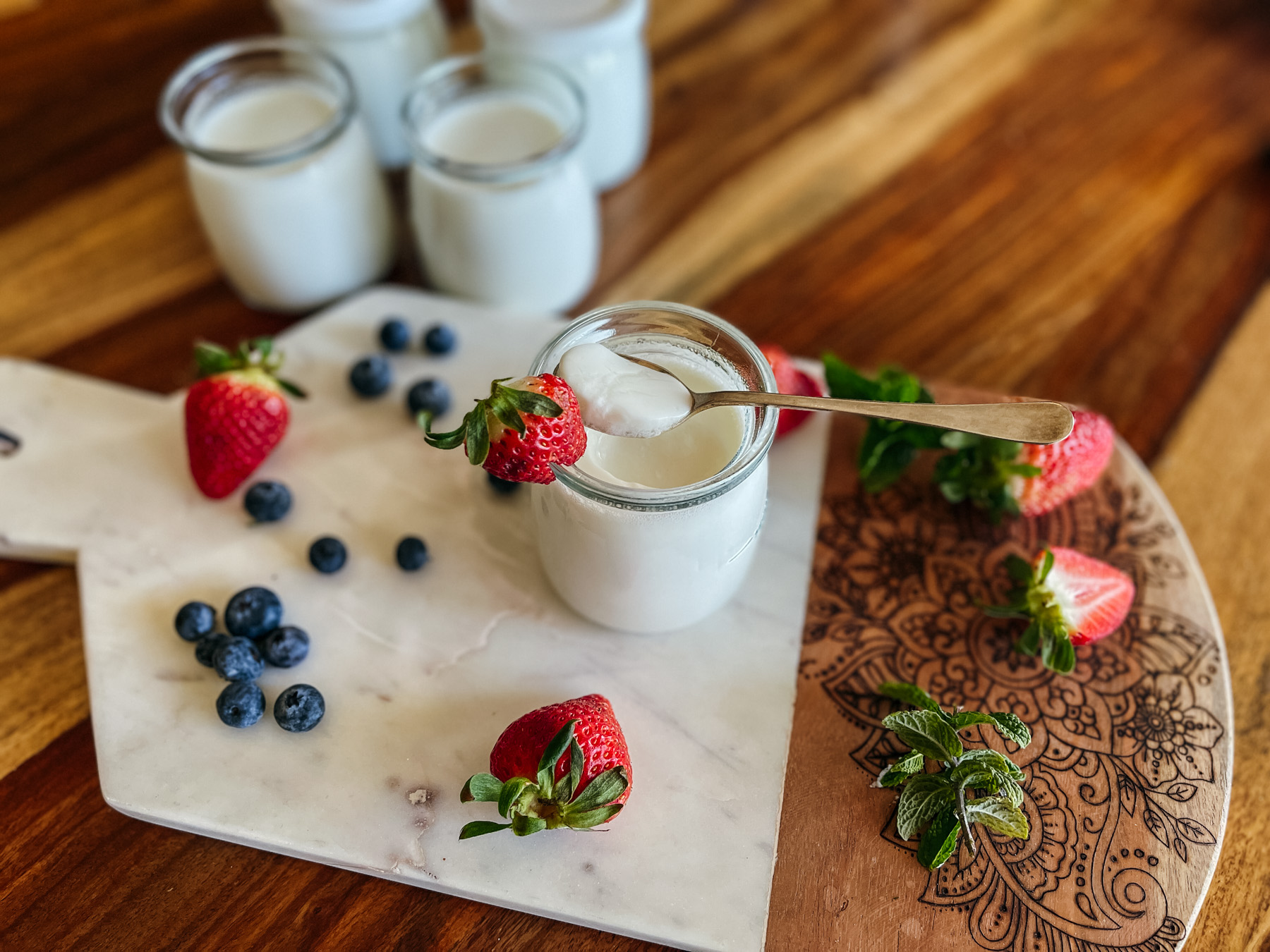 Keeping Bifdo strong and healthy is a real passion for me. I know how important it is and once you restore Bifdo with HMO's, then another thing you can do is consume a cultured yogurt too. I helped designed this yummy yogurt that has Bifdo Longum and a few other important strains that work together to give you a diverse and strong microbiome. Check it out here!

Listen To My Podcast With Beau From Layer Origin

When I first heard about how powerful HMOs were, I went looking for them. Human milk oligosaccharides (HMOs) are specific carbohydrates, and essentially super prebiotics occurring naturally in mother’s milk. They help build the all-important Bifidobacterium in the gut that has a myriad of health benefits all the while feeding other species of bacteria in your gut to promote a diverse and strong microbiome. I found HMOs at Layer Origin and was pretty impressed but after I tried them, I was convinced. Not too long after that, I was contacted by Beau from Layer Origin (@layer_origin) who is on this podcast. It's a leading-edge conversation and I'm excited to share it with you.

If you like this, then please share!
Posted in Best of 2021, Health and Wellness
8 Tips For A Healthy Halloween Sourdough Stuffing Bread —With Fermented Cranberry Sauce