If you like this, then please share!
Reasons To Love Almond Kefir How To Make The Probiotic That Inhibits Candida

Where All Wheat Came From 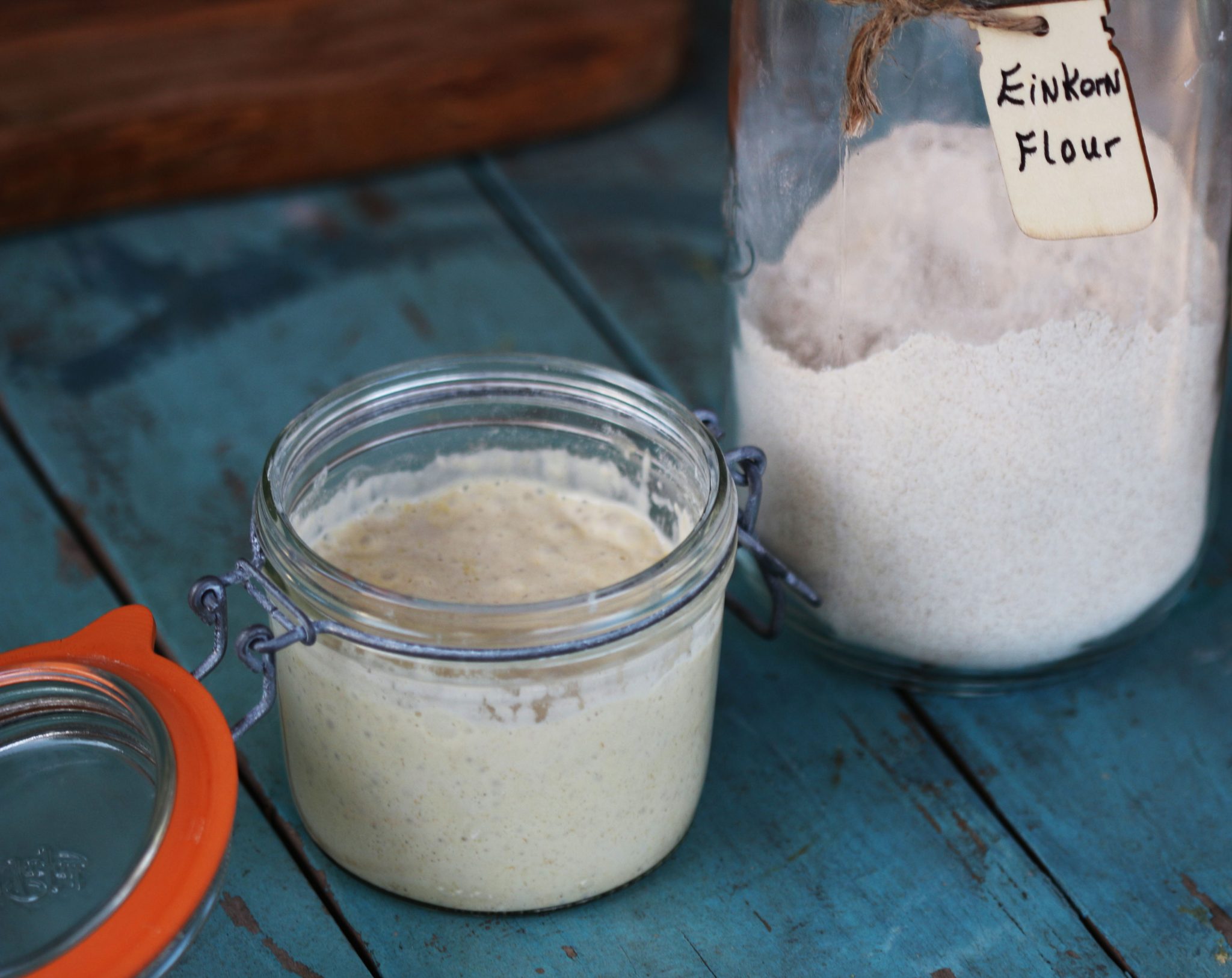 A few years ago, I started hearing about the ancient species of wheat called einkorn. People who were gluten intolerant were writing me letters about it and saying it was allowing them to eat bread again without the problems regular wheat had caused them, and I wanted to know more. I learned a lot about einkorn when I started working with it to make sourdough bread. It was then that I fell completely in love with this bread and became obsessed, making a fresh loaf every few days. It took me a while to figure out how to make it work with my sourdough starter, but figure it out I did. I've been making it for almost two years now and you can actually make it by converting your sourdough starter to an Einkorn sourdough starter, and I can show you how.  But since that time I've had so many requests for an einkorn starter that I decided to make one you can buy and use without converting it.  But before we get to that, I want to tell you why I love this bread so much.

Most ancient species of wheat

Einkorn wheat is the most ancient species of wheat. All wheat that we consume today is descended from einkorn wheat which has about 14 chromosomes as compared to other wheat which has 28-42. This is important since some studies show that ancient wheat, with its fewer chromosomes, has lower levels of gliadins. Gliadins are proteins that can cause sensitivities in those who struggle with gluten. Gluten is defined as a stretchy protein that is left behind after starch is washed away from a wheat flour dough. When you consume bread, the gluten proteins break down into smaller units called peptides, which are strings of amino acids. Certain proteins in most wheat products have been found to cause harm to those with sensitive guts.

The wheat we eat today is far different from ancient einkorn wheat. Wheat is a hexaploid, containing sets of chromosomes with three complete genomes termed A, B, and D in the nucleus of each cell. Modern wheat has been crossed with two different goat grasses. Goat grasses contain the D genome, which is the source of most gluten intolerance. Einkorn does not contain this troublesome D genome, only the A genome, and most testing for gluten intolerance is based on the D genome. And while einkorn does contain gluten, it is a different type of gluten and allows for easier digestion and nutrient absorption. Einkorn has 50% less phytic acid than regular wheat which also wreaks havoc on people's guts. When you use a sourdough starter to make a loaf of bread, you deactivate phytic acid. Phytic acid can inhibit absorption of vital nutrients and can even lead to nutrient deficiencies, so making bread with a sourdough culture and einkorn flour is a win-win when it comes to deactivating phytic acid.

So why did they change and hybridize our wheat from ancient Einkorn wheat? The biggest reason is that einkorn only gives a fifth of the yield as compared to modern wheat. In their efforts to get higher yields, wheat was modified without realizing the effect it would have on our health. Einkorn flour has not been altered or hybridized thereby being one of the most natural grains available.

High in protein, vitamins, and minerals, and delays diabetes

Einkorn has 30 percent more protein and is high in vitamin B6, zinc, and other vitamins and minerals. These are all crucial nutrients our bodies need to keep our immune systems running strong. I love that one sandwich can give me 30% of the magnesium I need in a day along with extra protein to keep me full and satisfied. I've seen a decrease in how much food my family craves throughout the day since I started making einkorn sourdough bread. We seem to thrive on this ancient bread. And here's another interesting finding - studies have found that ancient wheat decreases cell production relating to glucose and fat metabolism, and also helps prevent or delay diabetes development while increasing digestion and nutrient absorption.[1,2] 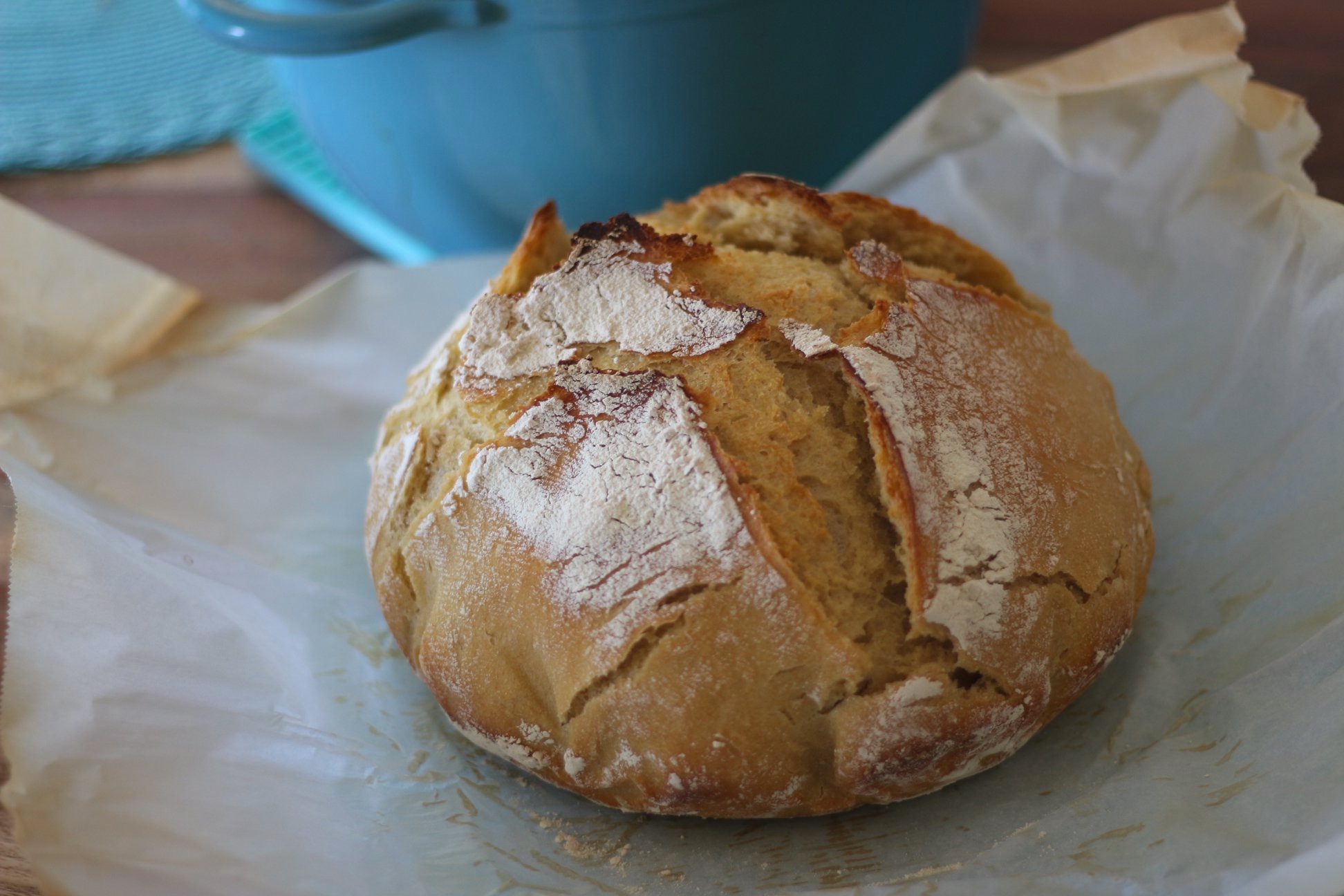 I have to tell you that I am grateful so many of you sent emails asking me about this bread and if we could make it with the sourdough starter purchased from me. I do really listen to you and am always looking for ways to help you. Spending days in my kitchen making this bread has been sheer joy. The first loaf I took from the oven almost made me cry, it was so beautiful. The flour is unlike regular flour in that it absorbs fats more slowly and is more sticky, but what a loaf of bread it can make! I remember one day when I was making a loaf of bread, I looked at the flour and felt like I was stepping back in time. This wheat is the original wheat and it had much to teach me. I love the flavor of the bread and the way it digests with ease and efficiency. You will too, but you need to remember a couple of little rules. If the dough is too dry, it won't rise well. If it's too wet, it will be very sticky, so keep that in mind and you'll make a wonderful loaf by following my instructions. 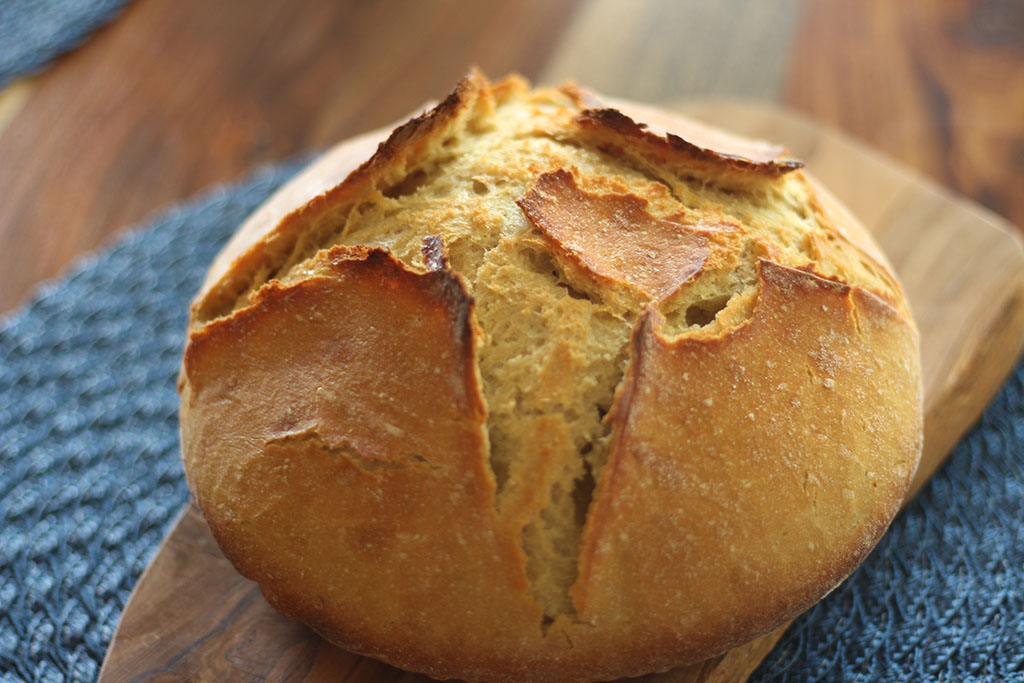 How To Make Einkorn Sourdough Bread 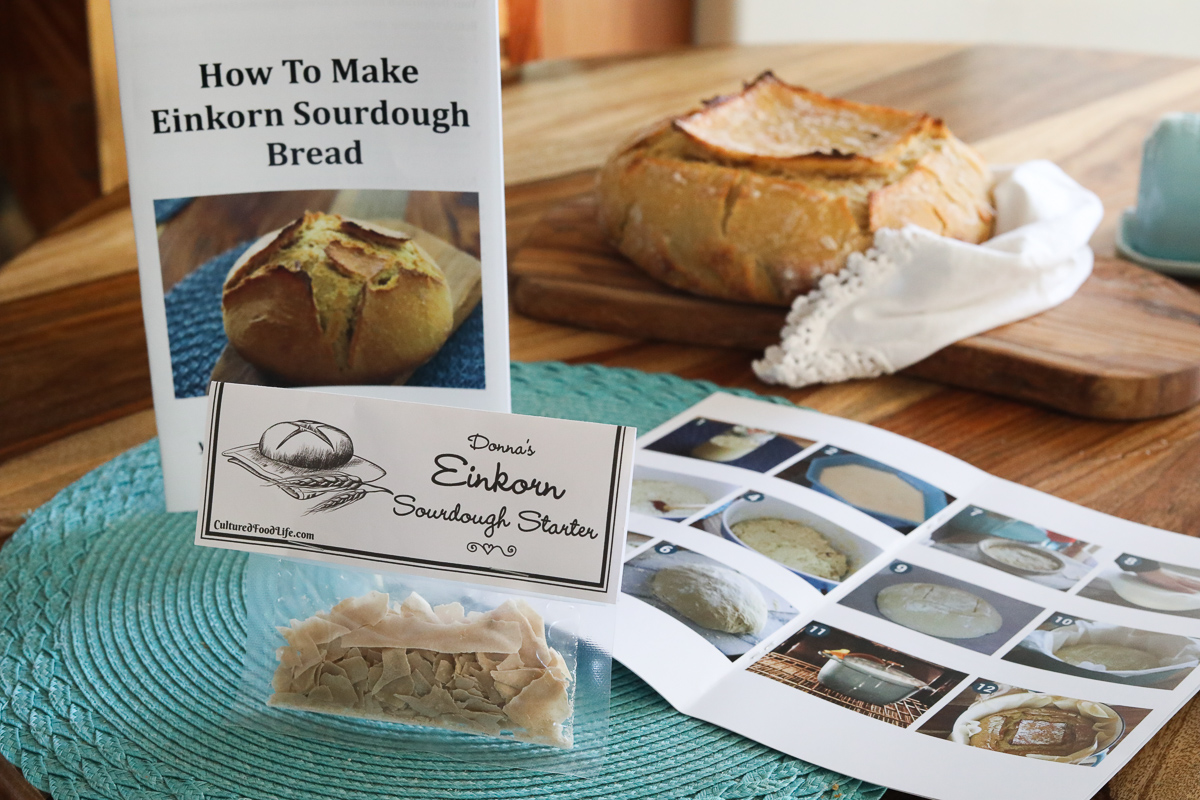 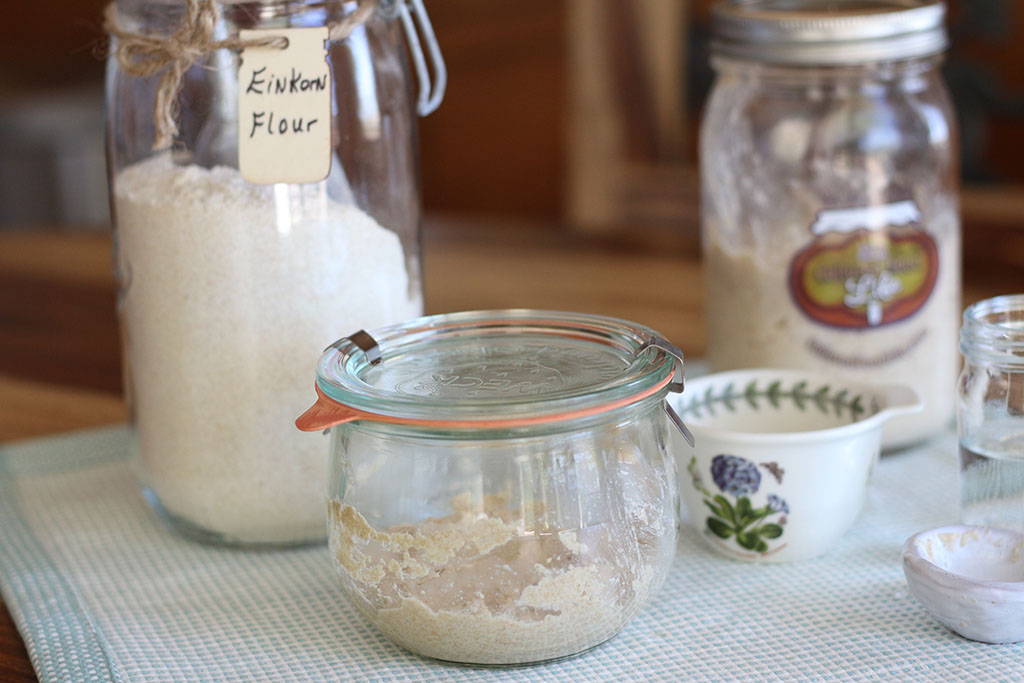 Convert Your Starter To An Einkorn Sourdough Starter 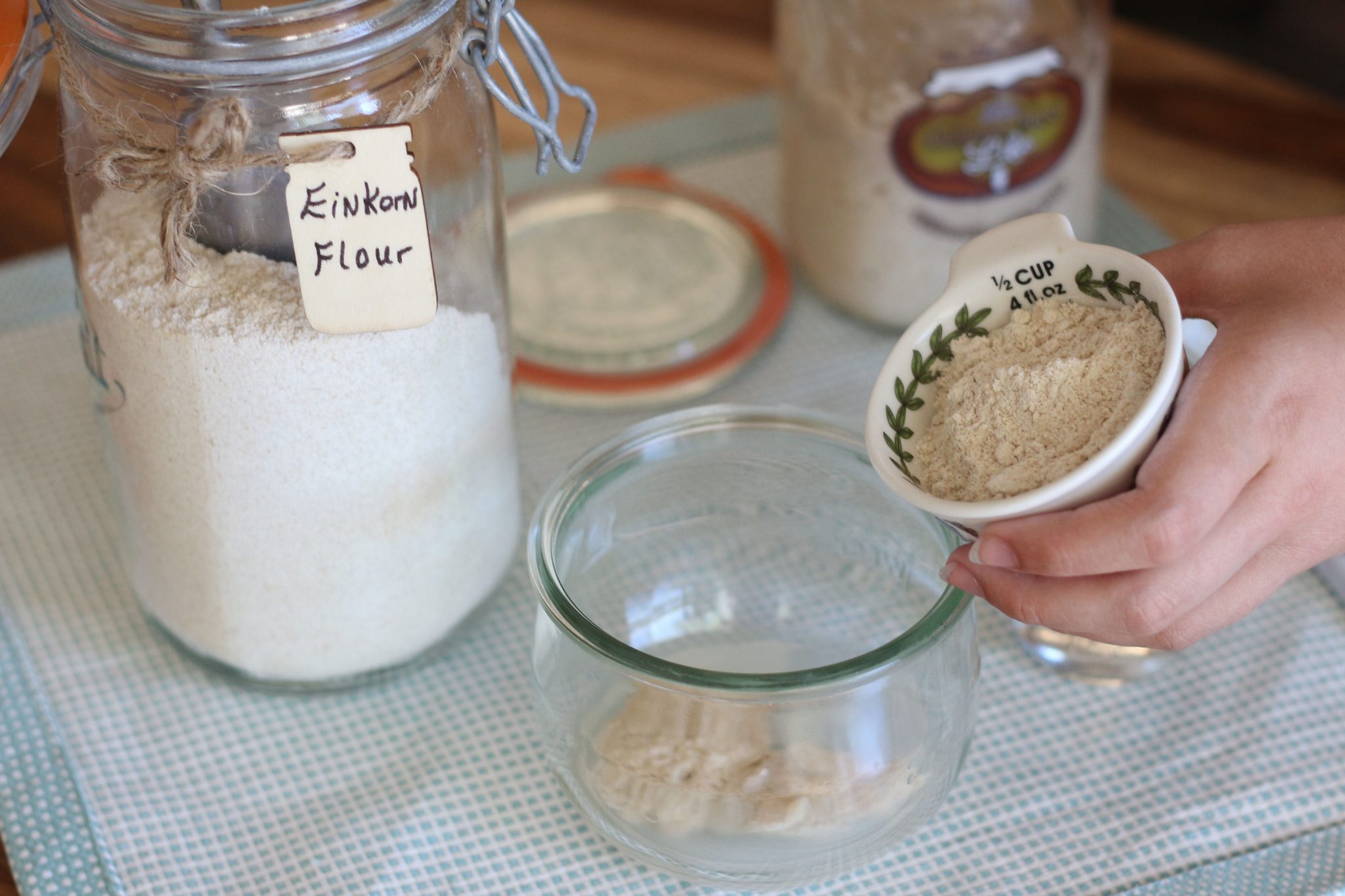 Where to Get Einkorn Flour

Have you heard about the ancient species of wheat called einkorn? Many people who were gluten intolerant seem to thrive on this bread since it's missing the troublesome protein contained in regular wheat. Check out the podcast to hear more.

If you like this, then please share!
Posted in Sourdough
Reasons To Love Almond Kefir How To Make The Probiotic That Inhibits Candida