If you like this, then please share!
Probiotics and Your Skin Can You Reuse the Brine From Cultured Vegetables?

Check Out The Stories and Recipes 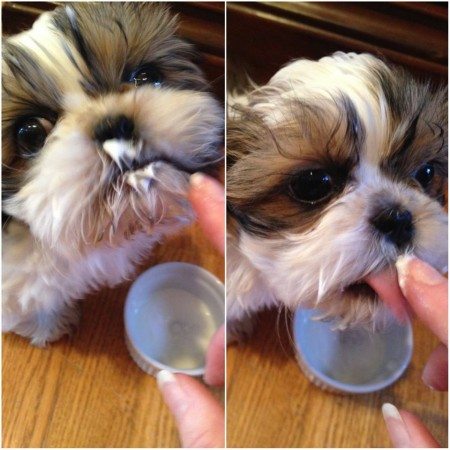 This little guy in the picture is my puppy Scoby (pronounced like kombucha SCOBY) enjoying his kefir. Kefir is incredibly good for dogs and we hear many stories of how it helps them in so many ways. Did you know that your pets need probiotics, too? In fact, most vets and animal experts have known this for years. If you have looked at dog food recently, you will notice that several of the brands are bragging about the prebiotics and probiotics in their dog food. Way more than we see in our people food. Why is this? Just like with children, we often take better care of those we love most before ourselves and veterinarians tend to be more ahead of the times than your traditional doctor. That being said, if you are buying dry food (for any animal) that says it has probiotics in it, keep in mind that, just like with our food,  if it isn't refrigerated, then the probiotics' lifespan can have passed and will no longer be active as probiotics are living and need food to survive.

The Story of Ledge 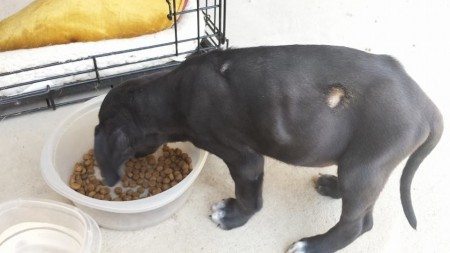 My daughter Maci found an eight-week old lab mix wandering down the road without a home. They took him in and named him Ledge. Ledge had three really bad hotspots, along with fleas and worms. A vet trip cleared up the worms and fleas, but they just couldn't heal those hot spots completely. Maci decided to give Ledge some kefir and after about three weeks, his hot spots cleared up! A few months after that they started feeding him lots of kefir, pumpkin, bananas, apples, eggs, prebiotics, salmon, and other more varied dog-approved foods. After a few weeks of this, Ledge's coat got so shiny that strangers have stopped her at the dog park to ask what she feeds him. I have posted the recipe for Maci's "Dog Smoothie" below! 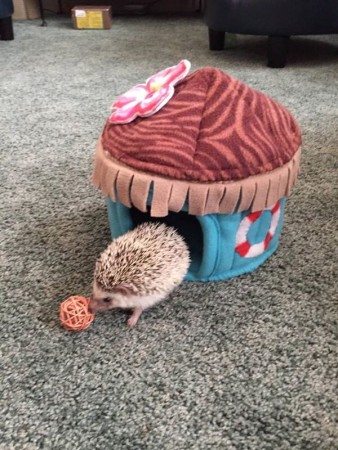 Our friend Michelle shared this adorable story about her hedgehog.

"Our kefir lover is named Ambrose (after the Redwall book series’ hedgehog. The book character was the wine-cellar keeper in charge of the other kind of ferments (LOL).
"We have a second hedgehog, Thor. Both were rescues, but Thor has an underbite that made nursing and the choice of kibble size a challenge for him.  He was the runt and almost didn’t make it.  His rescuer nursed him through some long nights with much phone support from other rescuers and breeders.  You’d never know it by looking at him now. He is now the larger of the two (over 400 grams) and very social. Very much my husband’s Hedgie."Dehydration can quickly take out a hedgehog.  Having cultured foods as a probiotic option to keep their systems on track and for recovery gives us peace of mind.

I also found that the hedgehogs like SCOBY’s that have been ground up in my blender with water.  I add just 1/2 tsp in the bottom of their kibble bowls.  Both hedgehogs licked their dishes clean of the SCOBY before finishing their kibble.

I had read that consuming SCOBY bits might help support joint health. My hedgehogs run about 3.5 to 7 miles on their wheels at night.  My oldest hog ran almost 10 miles one night.  Needless to say, their tiny muscular legs can be susceptible to joint problems as they age. I wanted to give the SCOBY idea a try. 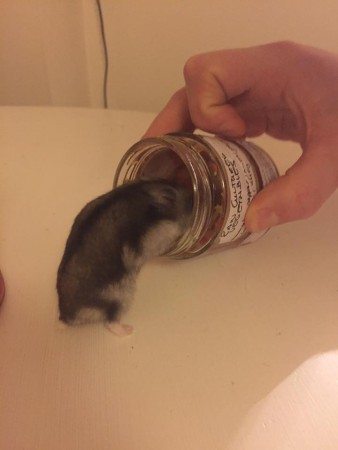 We've heard so many wonderful stories of healing with these foods.  All sorts of animals have benefited, from cats, horses, cows, pigs, to puppies, and even guinea pigs and hamsters!

It seems to be mostly kefir that is helping pets, but a Facebook fan, Bernadett David, has a pet hamster who loves cultured veggies. 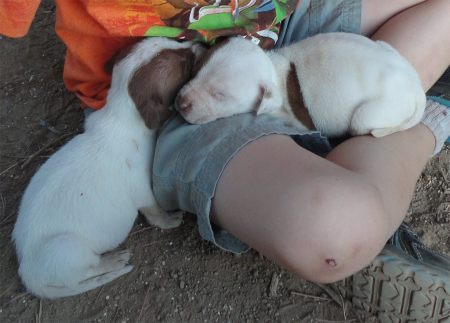 One of our very favorite stories is from reader Dawn Peace. "Oh, Donna I have got to tell you. My husband (with all loving intentions) brought home two puppies. They were three and one half weeks old, and were abandoned by a homeless man. I went into a frenzy of worry because I knew how important mommy's milk is to them. As quickly as my two kids, 6 and 8, became attached to these precious hearts, I realized something else wasn't right. The next day I took my husband to the side, and told him what I was seeing. 'Honey, when I was a little girl I held in my arms more than one puppy that died from Parvo. I think these little guys have it too.' After being quoted $1,500 - $3,000 per puppy with a 10% survival rate from the vet . . . we had some serious family decisions to make. We talked to my little girl (she's the older one) about what was going on and what decisions we had to make. She wanted to hold them tight to the very end. I understood that, for I was that little girl once, too. Next my son. Luckily, that earlier frenzy I had about the mother's milk led me to giving them kefir (made from goat milk, because that's what I had). 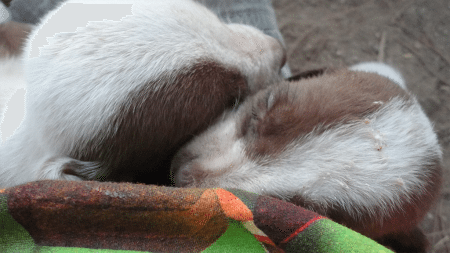 So we kept up strong with the kefir, hoping the probiotics would fight the Parvo and supply them with the nourishment they needed. We noticed after they ate that they would moan with pain. Both the kids said at the same time, 'Sounds just like daddy when his stomach hurts.' So we instantly started adding in aloe vera gel. I later found out that Parvo deteriorates the stomach lining. So this was so the right call. We also gave them coconut juice (which is coconut water with lime) for dehydration. This went on for a few days; then I added in some elderberry for immune boosting and just kept at it, praying that the kefir would lead the healing team. We got so close to losing the one that we thought for sure it wasn't gonna make the night. You know what, it did. They both did. They got better, and better, and better. They did it . . . Thank You, Donna . . . Thank You, God, for Donna, and for Donna stepping out and getting out what she discovered. Today the pups are nine weeks probably and running through my house! God Bless." Dawn

This is the story of Buttons, as featured on our Lives Touched Page.

From Margaret, "Funny story, the first time I made kefir cheese, my tiny Silky dog (15 yrs old and 4kg)) stood by the bowl catching the whey. I had the kefir hanging from the clothes airer dripping into a bowl below. She began making deep throaty noises and as I noticed what she was doing, I realized our other Silky (the same age) was out in the hallway whimpering because she was afraid to come into the room.
"Her sister was threatening her to not come close to 'her' bowl of whey. So, now I drain my kefir in the bathroom where I can shut the doors. When the dust settled, I gave them both a small drink of whey and some kefir, which they loved. They gobble it down now, twice a day. It has made so much difference to Buttons (the first dog), who suffers from IBD and occasionally pancreatitis, that I will keep on giving it to them. Buttons was experiencing a bout of IBD at the time I started giving it to her, but that cleared up very quickly and the vet said that once we know that the IBD bout has completely cleared this time, we'll keep the dogs on the kefir and wean Buttons off her medication (herbal) and see how she goes.

"They like it so much that I tried them on my sauerkraut - but nope, not this time! LOL! We are growing some of our own veggies and sooner or later we'll catch up on the rest of the world and I'll be able to follow your recipes and ideas more closely. I'm able to adapt them to using what I can get hold of so we're doing okay. You have changed our lives so much for the better, so thank you for sharing your story and ideas.

Check Out These Recipes

Kombucha Treats for Your Dog

SCOBYs are another favorite with animals. We've got pictures of all kinds of animals eating SCOBYs, from goats, to chickens, to dogs. We have a wonderful SCOBY dog treat recipe below but you can also give it to them plain and raw. They like extra kefir grains, too!

Kefir was also featured in Dogs Naturally Magazine.  It has a kefir smoothie recipe for your dog too!

Please continue to share your Probiotic Pet stories. It warms my heart to see the little ones we love so much become well!

When introducing cultured foods to your pets, remember to start slowly and with small amounts (as they will go through a cleansing phase). One to three tablespoons is plenty for a ten pound animal in the beginning and you can increase it if you like as they get more adjusted to it. Their stools will be either loose or less frequent in the beginning stages so do not worry. After a few days to a couple of weeks, they will be better than before! If your dog or pet is on the picky side, you can add small amounts of kefir into something they will like, such as tuna fish or chicken broth or even their normal food.

Pets need our help, and I have seen and heard countless stories of pets healing with the addition of kefir to their diet. We've seen dogs, cats, birds, horses, cows, hedgehogs, hamsters, and so many other animals heal from UTI's, gastro issues, cancer, and so much more when they were given kefir. Check out the show and help our furry friends. You might just need this info at some time and you'll be glad you listened.

If you like this, then please share!
Posted in Milk Kefir
Probiotics and Your Skin Can You Reuse the Brine From Cultured Vegetables?