If you like this, then please share!
Thoughts and Habits That Changed Everything Are Fermented Vegetables Safer Than Raw Vegetables?

How Microbes and Your Brain Work Together 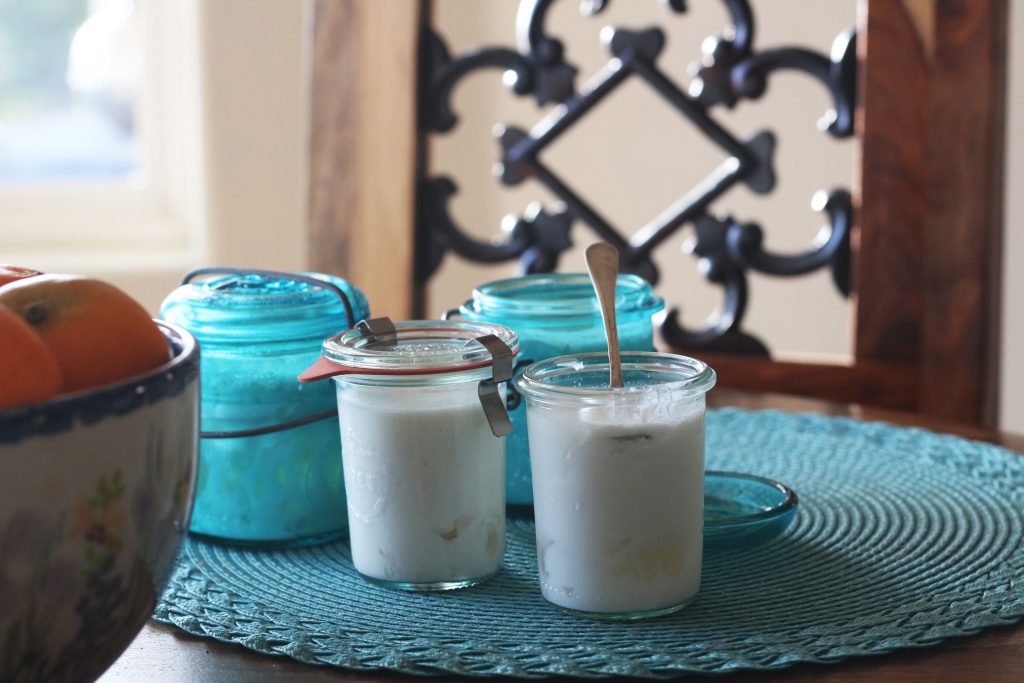 A healthy body isn't the only result of consuming good bacteria - having a healthy gut also leads to a healthier emotional state.

Before I found cultured foods, I was a different person - physically and emotionally. As a young woman, and all the way into my late thirties, I would get upset easily. I didn't smile often and simply wasn't that happy. I am sad to say that I often felt grouchy and snapped at my kids. But when I started to eat cultured foods, everything changed. The summer I started to clean up my diet I also started to realize that I wasn't getting overly cross with my kids. I began to wonder how food, especially cultured food, could change someone's state of being so much. Since this realization, I've come upon research that helps me understand what happened in my life.

An article published in Natural News talks about a study out of Oxford University in the U. K. led by Dr. Drew Ramsey. The article discusses Dr. Ramsey's findings: "Nutrient deficiency is a major cause of behavioral abnormalities. Without the proper nutrients, the body cannot produce the appropriate chemicals and hormones required for clear thinking and a healthy mood, which in turn can lead to irrational and even dangerous behaviors."

The study he conducted, in an attempt to see just how diet affects mood and behavior., was done with prison inmates who were split into two groups. The first group was given vitamin supplements and the second was given a diet of junk food. What he found is that the people in the first group became much more calm and less aggressive.

A nutritionist named Nicolette Pace said, "Deficiencies in nutrients, magnesium or manganese, vitamin C, or some B vitamins may make a person hyperactive towards a stressor, a short fuse so to speak. Junk food doesn't give your body what you need to cope with day-to-day stresses.1"

This means that anything you can do to help your body absorb more nutrients, such as getting more healthy bacteria in your gut, will help your emotional state. 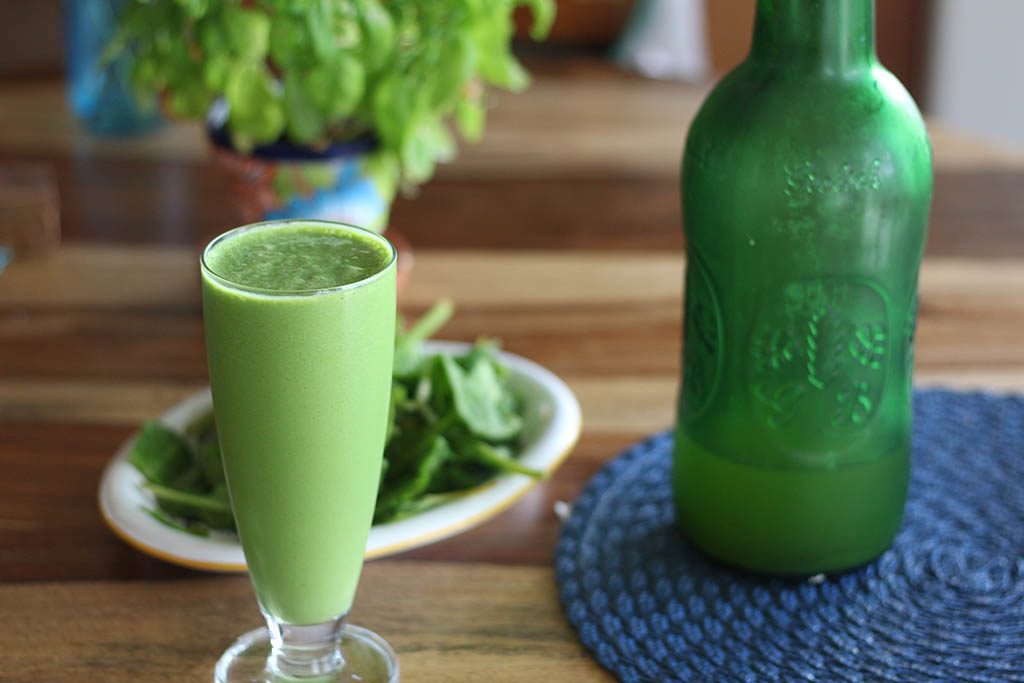 John Cryan, a neuroscientist in Ireland, conducted another study which found additional compelling links between gut health and mental health.

In his study, anxious mice were dosed with the probiotic bacterium Lactobacillus. This decreased stress hormones and even had an increase in brain receptors for a neurotransmitter that is vital in curbing worry, anxiety, and fear.2 Why would this happen? One reason is that 90 percent of the body's total serotonin - the feel-good chemical that leads to happiness and a sense of well-being - is produced in the digestive tract. Only 5 percent is produced in the brain.

Let's talk about this a little more. Serotonin is produced in different anatomical locations. In the brain, it acts as a neurotransmitter; and in the periphery,3 it can act as a hormone. Serotonin does not cross the blood-brain barrier; therefore, the two major pools remain separated.

Although 95% of serotonin is produced in the gut and is peripheral, its functions have been ignored until recently. Peripheral serotonin is produced in the digestive tract by enterochromaffin (EC) cells.  Researchers at Caltech found that the EC cells from germ-free mice produced 60 percent less serotonin than did their peers with conventional bacterial colonies. When these germ-free mice were recolonized with normal gut microbes, their serotonin levels went back up - showing that the deficit in serotonin can be reversed.4 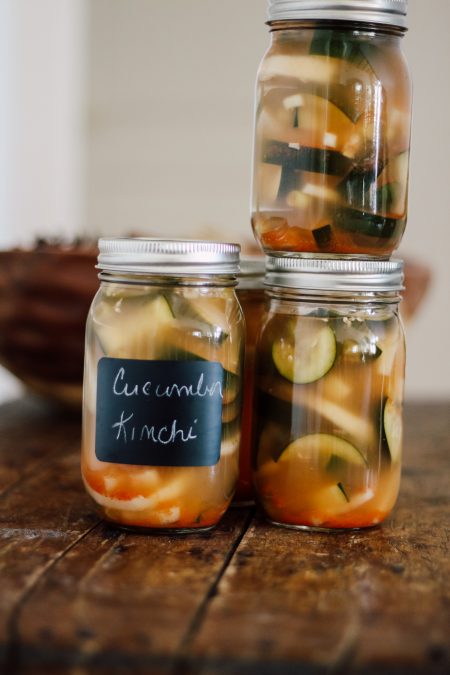 William & Mary college Psychology Professors Matthew Hilimire and Catherine Forestell recently joined with University of Maryland School of Social Work Assistant Professor Jordan DeVylder for a study. It was conducted on June 18, 2015, and showed that a diet rich in fermented foods and drinks containing probiotics may help curb social anxiety in young adults.

Social anxiety is a disorder that fills you with a fear of being judged by others or embarrassed in front of them in ordinary situations The researchers looked into whether eating fermented foods helps people get more out of traditional treatments such as medication or cognitive-behavioral therapy. The study, published in Psychiatry Research, included 710 students taking intro psychology courses at William & Mary. They filled out questionnaires about their fermented food eating habits, and rated how worried (or neurotic) they tended to be, and also said whether or not they had social anxiety. The questionnaire asked about a variety of foods including yogurt or food and drinks that contain yogurt, kefir, soy milk kefir, miso soups, sauerkraut, dark chocolate, juices that contain microalgae, pickles, and kimchi.

While not all of those foods necessarily have the live, active cultures that some cultured foods contain, they still have the potential to contain prebiotics. Researchers also considered factors including eating healthy foods and exercise along with analyzing their answers to look for underlying patterns.

Researchers stated, "Probiotics also reduce inflammation of the gut. Because anxiety is often accompanied by gastrointestinal symptoms, reducing gut inflammation helps alleviate those symptoms. Probiotics have also been shown to modify the body's response to stress, and the stress response is highly linked to mental health disorders, such as social anxiety."

The researchers stated, "Research on gut bacteria is expanding a lot. This study is interesting in how it ties together several relevant threads of personality, food intake, and exercise. This information was not collected from a clinical sample of people with diagnosed anxiety disorders. Participants were first-year psychology students in an American liberal arts university. This means the results have implications for broad population health. Bacteria in the gut produce vitamins and break down our food. Their presence or absence has been linked to all kinds of mental and physical disorders."

Microbes in the gut make neuro-chemicals 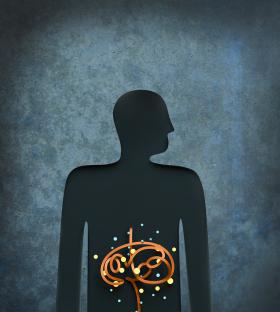 One more study examined a group in Norway. They examined feces from 55 people and found certain bacteria were more likely to be associated with depressive patients.

So, since we're talking about feces and microbes, let talk about Mark Lyte. Lyte has worked in a small closet lab for over three decades in the Texas Tech University Health Sciences Center.5

He's been working away examining feces from monkeys. One day he got feces samples from monkeys. He placed them in 18 vials and had them spun down in a centrifuge. Lyte got really excited because he couldn't believe what was extracted out from the monkeys. "We found that the microbes here in the gut make neurochemicals. We didn't know that! Now, if they make this stuff here, does it have an influence in their brain? Guess what?  It does and as humans, we make the same stuff in our bodies." All this communication has an influence on our behavior, our moods, and a million other processes. Lyte hopes to better establish how certain gut microbes influence the brain functioning (as psychiatric drugs do). He is currently compiling a list of the psychoactive compounds found in the feces of monkeys. Anxiety, depression and several pediatric disorders, including autism and hyperactivity, have all been linked with gastrointestinal abnormalities. Here's the great part - changing your gut microbes is not invasive brain surgery, and this is the point!

Lyte started this research three decades ago and everybody dismissed him, but the National Institute of Mental Health awarded four grants worth up to $1 million each to spur new research on the gut microbiome's role in mental disorders, affirming the legitimacy of a field that had long struggled to attract serious scientific credibility. Lyte and one of his longtime colleagues received one of the four grants and stated, "What Lyte thought for more than 25 years has come to fruition. It seems reasonable to say that we might one day use microbes to diagnose neuro-developmental disorders, treat mental illnesses and perhaps even fix them in the brain. "

Changing a person's bacteria might be challenging if you didn't know Me! But it's easier than altering your genes. The easiest way to change your gut flora is to feed it probiotic and prebiotic foods. This is what I did and you can do it too. It's fun and makes you feel great! Eating probiotic foods is much stronger than taking supplements that are often killed by the stomach acids before they ever get to the parts of the body that need them.

When you eat a probiotic food, the food itself provides a protective armor that helps shield the friendly bacteria. It also speeds the transport out of the stomach, thus keeping the good bacteria intact. Probiotic pills are often trapped in the acids of the stomach, and the probiotics are killed before the body ever gets a chance to use them. So consuming probiotic foods such as kefir, kombucha, and cultured vegetables is more effective than taking pills. Check out how to make these foods below. Start with the one that most interests you and let those microbes produce the chemicals you need to feel good.  When you feel good you do good. It's a side effect of being happy! 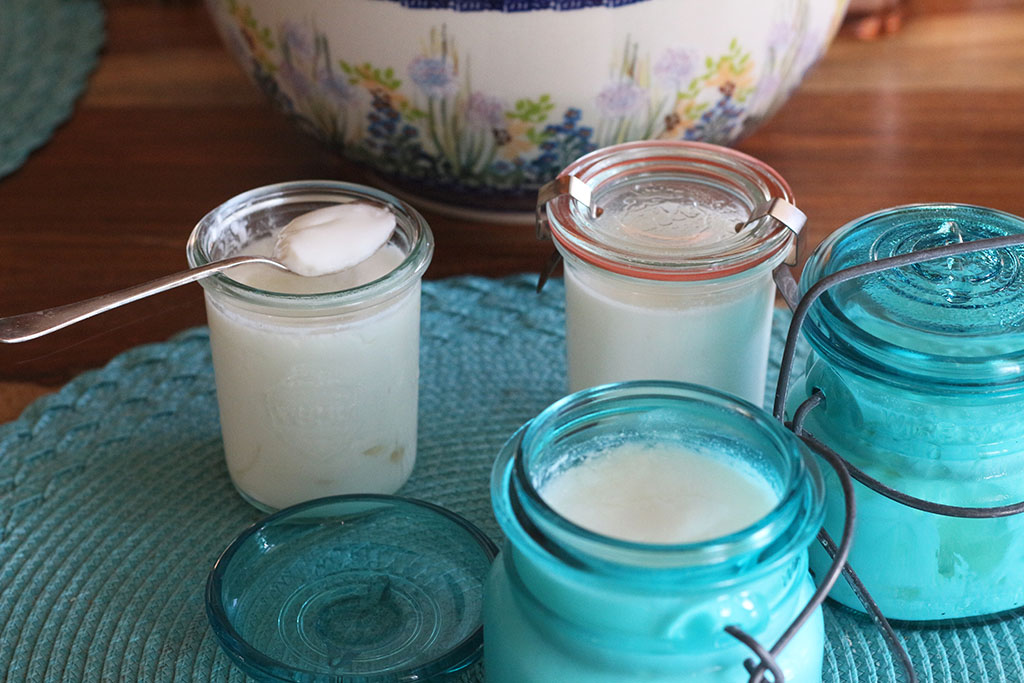 Kefir the Champagne of Yogurt 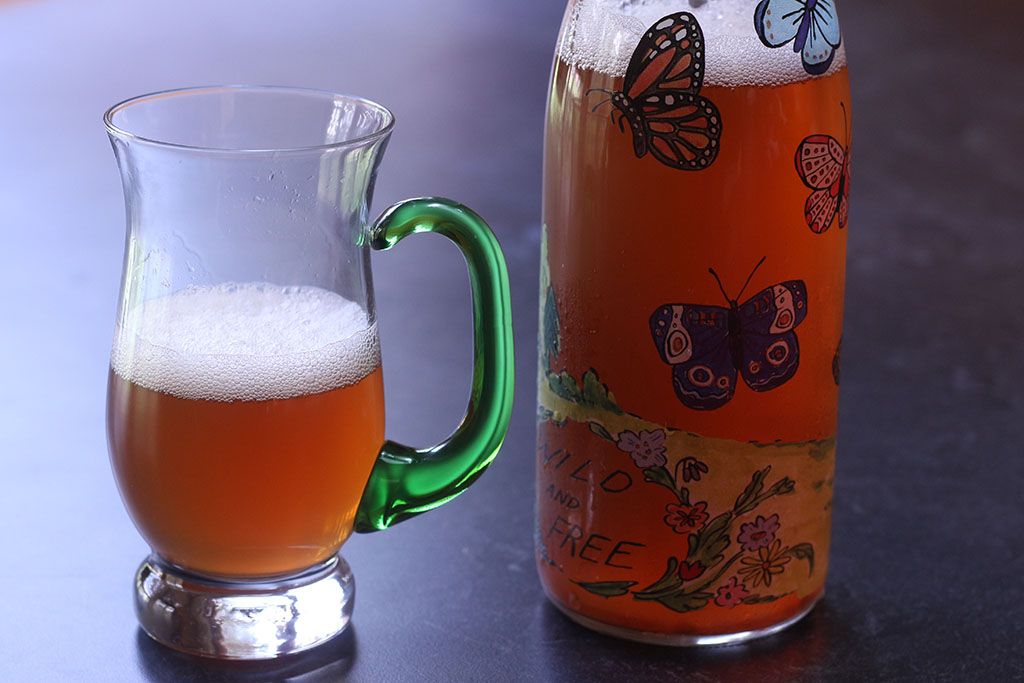 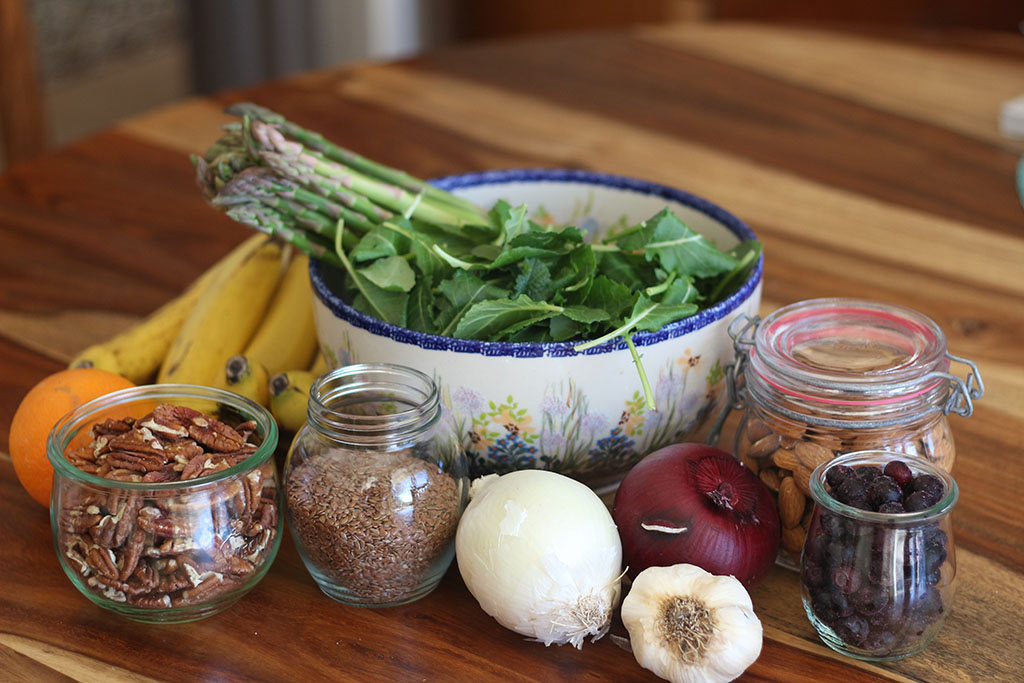 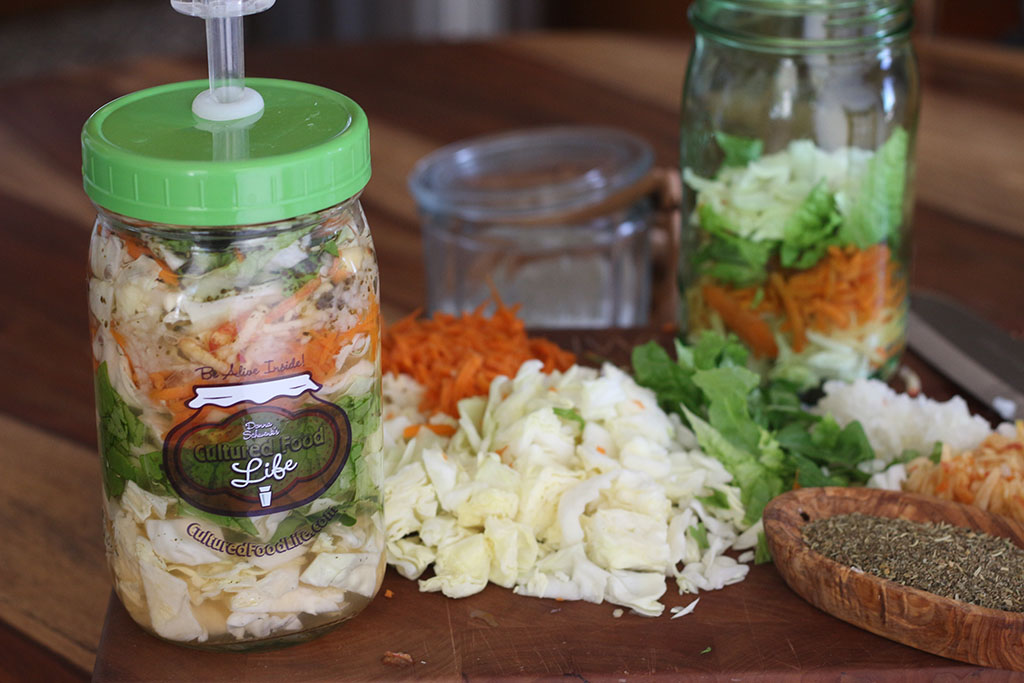 Veggies Made with Microbes

Before I found cultured foods I was a different woman physically and emotionally. New research shows that you make chemicals in your gut that affect your emotional state. Check out the podcast for more info.

If you like this, then please share!
Posted in Ailments, Health and Wellness
Thoughts and Habits That Changed Everything Are Fermented Vegetables Safer Than Raw Vegetables?