If you like this, then please share!
Starter Cultures ~ The Science Experiment How to Make Ginger Soda - Delicious Medicine for Your Body

Get Dirty – Get Microbes – Be Happy!

Does Dirt Have Microbes?

Several years ago I found myself with much to do. With my daughter getting married and a deadline for my new book looming, not to mention the fact that both my husband and I have our own businesses . . . it was intense at our house. I started feeling the pressure and found myself in tears a lot and feeling completely overwhelmed. 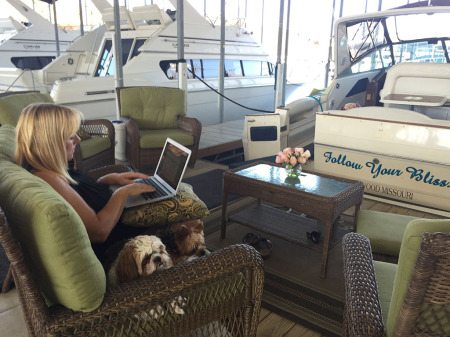 After my daughter's wedding, I set to the task of writing my new book and went to stay on our boat at the lake by myself. Something about water is soothing to me and walking barefoot at the lake calmed that franticness inside of me. It wasn't too long before I found the words to write flowing out of me like a river. I called my husband to tell him, and with tears streaming down my face and the sun shining brightly off the water, I described to him what I thought was happening. "I found a quietness inside and you know, honey - I am seldom quiet! It feels like peace here, I don't know what is happening but something changed inside of me and my writer's block is gone." Something about being in nature helped me find what I thought I had lost. The book I needed to write was there all along, inside of me. When I came back home, I went barefoot outside every day and dug my toes in the dirt. I sat in my backyard with my dogs and wrote my book nonstop in about a month! Every single page was written outside and it became one of the most rewarding things I have ever done. It was funny because my little dog, Scoby, kept digging holes all around me in the dirt and I kept putting my feet in them. Honestly I didn't know what had happened to me, but it was one of the easiest things I had ever done and it felt like I had become a different person. Just a few days later I began to understand what was really happening; and lo and behold, bacteria had a part in all of this too. An email blog I subscribe to showed up in my inbox that seemed to explain what was happening to me.

Is Dirt The New Prozac?

The email blog article was about dirt. In 2007, Christopher Lowry, associate professor in the department of integrative physiology and Center for Neuroscience at the University of Colorado at Boulder, and a team of researchers published an article in Neuroscience that had people discovering that dirt was the new Prozac. A bacteria found in soil called Mycobacterium has been found to affect the same neurons as Prozac, offering people a natural lift in mood. They exposed lung cancer patients to this bacteria called Mycobacterium vaccae, found in soil. The patients unexpectedly reported increases in their quality of life, including a brighter mood. The very same thing was happening to me and it was undeniable that the effects were coming from spending time outside in nature. I have known many gardeners who have exclaimed how gardening is their happy place. Which convinces me more that we should grow our own food. It's good for the body, the mind, and it brings us a quiet peacefulness inside

This wasn't all I discovered about dirt. It wasn't a week later that another email came into my box with a video about a new movie coming out called Grounded. I had heard about this thing called grounding (or earthing) but it was kind of crazy sounding so I never really paid attention to it until now.

Earth is an electrical planet

The surface of the Earth holds health-boosting energy and just as the sun gives you Vitamin D, the ground gives off what they call "electrical nutrition." All we have to do is touch it to become truly alive. The Earth is an electrical planet, and you are a bio-electrical being living on this electrical planet. Your body functions electrically via the heart and nervous system. Grounding, they say, is kind of like electrical nutrition that restores and stabilizes all your circuits and reduces inflammation. In the movie, grounding had a huge impact on one man and as he shared his experience with others, it healed his town. It was quite impressive, with fifteen years of research and many stories of healing. It's finding its way into many lives around the world and it found its way into mine. Just walking barefoot on the ground can accomplish the task of grounding. Digging in a garden, or even swimming in water is grounding too. They are making grounding shoes, grounding sheets, and mattresses that people are using with spectacular results, although I haven't tried them yet.

So whether it is the bacteria in the soil, or the electrical currents that pulse through the earth that lifted my spirit and allowed me to write my third book and find peace, I am very grateful. Although, I love the part about bacteria the best! It opened a window of understanding and allowed me to find what I was so desperately needing. I spend an awful lot of time outside now, and with winter coming I was just wondering - how hard would it be for my husband to build me an igloo this winter? As crazy as it sounds, it is also based in a lot of science and microbes seem to get my attention wherever they are. I think it's a divine plan and one that was meant to be found by me when I needed it the most. I love to discover new things and share them with you, and I am thrilled that shoes are not a necessity any more in my life. Makes me smile. Check out the trailer below, it might make you go play in the dirt, plant a few flowers, or take a walk ~ barefoot.

Researchers have discovered that dirt is the new Prozac. Billions of microbes in the dirt can keep us healthy and happy. The earth holds health-boosting energy and gives us what is called “electrical nutrition.” Learn more about our dirt on this week’s episode.

If you like this, then please share!
Posted in Health and Wellness
Starter Cultures ~ The Science Experiment How to Make Ginger Soda - Delicious Medicine for Your Body